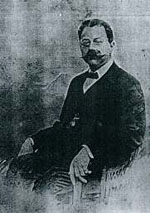 At the age of 20 he went to Antwerp to work in the grain trading firm Mosco Z. Danon. He opened a branch office in Buenos Aires for them.

In 1898 Hermann Weil established his own firm Weil Hermanos & Cia. His brothers Samuel (1867-1922) and Ferdinand (1861-1919) were partners in the firm. After some years they controlled large parts of the Argentinian grain trade.

Having changed the firm into a private limited company Hermann and Ferdinand Weil returned to Germany in 1907 and settled in Frankfurt/Main. Hermann Weil did this for his health because he wanted to be near one of the leading capacities for his paralysis. Samuel Weil carried on the business in Argentina.

In Germany Hermann Weil started a career as publicist and advisor. After the beginning of WWI he worked not only for the Institute for World Trade in Kiel, but also for the German General Staff because he could provide lacking information through his international connections. Finally he was allowed to report even to Emperor Wilhelm II whom he seems to have strengthened in the idea about ending the war by a resounding victory.

After WWI he engaged to be patron for many caritative and social institutions. He was highly honoured for this from the town Frankfurt and got a honorary doctorate from the university there.

Hermann Weil never lost contact to the Kraichgau and especially to Steinsfurt. After his return from Argentina he visited his birth-place several times and he financed the „Koch- und Fortbildungsschule” (school for vocational training and cooking) that was completed in 1925.

He build a mausoleum in Waibstadt that is today one of the most impressive memorial buildings in the region. It was meant to be the last resting place for his urn. During the inauguration ceremony on September 5, 1927 Karl Spiegel, the provost of Waibstadt mentioned the effect which the expensive undertaking had for the economy of the region.  It had  „… given the opportunity for artistic activities, for employment and te be able to earn their living to hundreds of people during these hard times of economic turmoil …”

Only a few weeks later Hermann Weil died on Oktober 3, 1927. The urns of Herman and Flora were deposited in the Mausoleum at the Waibstadt cemetery. When the mausoleum was demolished on November 10, 1938 the urns were stolen.

This article is taken from our old web page. It has been translated and a few mistakes were corrected.